Edinburgh’s ETBC event made a positive impression on the NTI team – a lot of contacts were made!

For any vendor the prospect of travelling to faraway places generates mixed feelings. There is always that gnawing sense of trepidation that accompanies the thought of “what am I doing?” as well as the tingling sensation that comes with anticipating something new and exciting. And this year, the European Technical Boot Camp (ETBC) for the NonStop community, hosted by BITUG, didn’t disappoint. Perhaps the one thing that wasn’t expected to be playing any sort of role had to do with our overall appreciation of the climate – Edinburgh put on a couple of sunny days that saw daytime temperatures exceed those of London, most of Spain and even Los Angeles!

For your NTI team there were certainly many miles travelled to get to Edinburgh involving planes, trains and automobiles! However, to see just how large a group of NonStop community members made it to the event was heartwarming to say the least. So often in the past, Regional User Group (RUG) events have seen the bulk of participants a rich mix of HPE NonStop team members along with NonStop vendors, but not this time. There were representatives  from almost every industry vertical that included a substantial presence of the British Isles NonStop community. Presentations were well attended and booth / desktop traffic was substantial. NTI would like to at this time extend our thanks to the BITUG committee for executing well on a program that offered considerable insight into where HPE is taking NonStop and the NonStop community wasn’t left disappointed at any time.

In the lead up to the event, NTI began offering glimpses into the strategy behind the evolution of DRNet® that is taking the product set deeper into the world of data. At ETBC NTI shared the work being done behind the scenes as we begin to showcase PROVisioning: Excellence in Data – a new focal point for all of NTI’s product development. If as yet you haven’t read the feature article published in the May, 2019, issue of NonStop Insider, NTI –Platinum Sponsor for ETBC 2019; look for greater insights into our vision! there were references to ETBC along with a brief description of what would be covered in the NTI Plenary session given by Richard Buckle, Cofounder and CEO, Pyalla Technologies, LLC:

In the latter half of 2018 NTI started putting the pieces together on a strategy that is focused on data and on making sure data is being managed in multiple ways – from data that is replicated to better ensure business continuity to data that is simply being distributed to ensure its presence where it is needed to data that is integrated into platforms such as data warehouses and data lakes.

Along the way, data may be subject to transformation and this too is becoming an integral function of NTI’s premier product in this market - DRNet®. Now that we are getting deeper into 2019, NTI is able to showcase the progress it has made in turning strategy into products as the company lifts the veil on exciting new capabilities that will help NonStop play an even bigger role within enterprise IT. 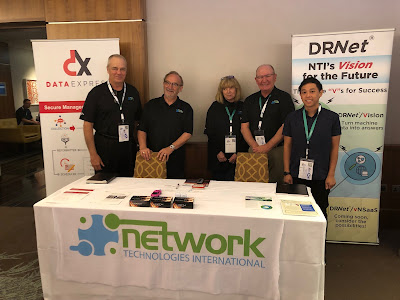 Looking at showcasing everything NTI – the NTI team showcased pretty well as the team handled a constant stream of customers and prospects. As published elsewhere, Tim Dunne, NTI Senior Vice President, Worldwide Sales, was only too happy to see as much foot traffic as did make its way to the booth. “We had major financial institutions stopping almost constantly by and asking us about how we can address their business needs. It was hard not to be impressed with just how many customers had turned up for this event.” As for what’s next for ETBC the plan is for a similar event to be held in Berlin next year and based on responses received to date, be assured NTI will be a participant in this major annual European event once again.

To read the feature published in NonStop Insider referenced above, simply go to the May issue by clicking on the hyperlink included above or just as  easily, cut and paste this link into you browser - https://www.nonstopinsider.com/uncategorised/nti-platinum-sponsor-for-etbc-2019-look-for-greater-insights-into-our-vision/